Cleveland Ballet closes out perhaps its most successful mainstage season to date with a reprise of their 2016 hit, Ramón Oller’s adaptation of the comic ballet Coppélia. The first full-length ballet production created on the now 5-year-old company returns to Playhouse Square’s Ohio Theatre for three performances on April 5 & 6.

“It’s very dear to us,” says company artistic director Gladisa Guadalupe. “When Ramón [Oller] first choreographed the ballet it was on a young company. Now to bring it back four years later, the company is bigger and the dancers are stronger artistically and technically.”

Based on two tales by E. T. A. Hoffmann, the ballet originally choreographed by Arthur Saint-Léon in 1870 to music by composer Léo Delibes, tells the story of eccentric inventor Dr. Coppélius who makes life-size dancing dolls including his beloved Coppélia who he desperately desires to bring to life. Seeing the lifelike doll Franz, a village youth, becomes infatuated with it to the detriment of his relationship with his intended Swanilda. Through a series of humorous encounters the unlikely trio of Franz, Swanilda and Coppélius become entangled in a web of mistaken identity, misdirection and mischievousness that by ballet’s end once again confirms the adage that true love conquers all.

Oller, a native of Esparreguera, Spain, is an award-winning choreographer who has created ballets for Compañía Nacional de Danza, National Ballet of Spain and New York’s Ballet Hispánico. For his 80-minute 2-act adaptation of Coppélia, also set to Delibes’ music, he says he was inspired by the 1966 film El fantástico mundo del doctor Coppelius. For the most part his version follows the traditional Coppélia storyline. Where things differ is in the second act in his revealing more of Dr. Coppélius’ longing for a family of his own and the idea of real versus imagined love. That comes to its pinnacle in an added dream sequence in which Coppélius dances a tender and more contemporary dance duet with Coppélia who imagines briefly comes to life. Oller also swaps the ballet’s conventional folk dances and mazurkas for fast-paced and intricate partnering work showcasing the talents of the company. 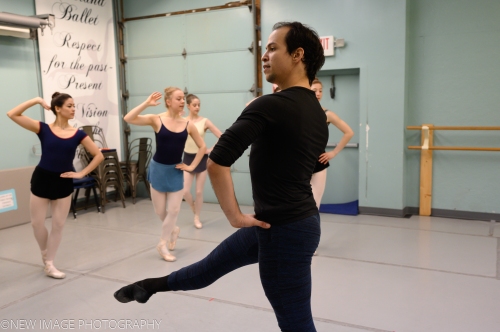 A cast of 49 including dancers from the company, apprentices, trainees and students from The School of Cleveland Ballet, will take the stage for this reprise. As a reflection of the aforementioned growth of Cleveland Ballet as a company, Oller has made some changes to improve the production including beefing up sections of the choreography to make them more challenging and exciting, and adding more life-size dolls to second act scenes in Dr. Coppélius’ workshop such as Pierrot and Columbine Dolls and a Duke and Duchess pair.

Reprising their roles from 2016, Oller will once again portray the role of the wizard-like doll maker Dr. Coppélius, Elena Cvetkovich, the Coppélia doll, and Bath-native Lauren Stenroos in the role spirited lead role of Swanilda alongside new partner Alfredo “Freddy” Rodriguez as her love interest Franz.

“Lauren’s evolution as a dancer over the years has been amazing,” says Oller. “She controls the stage.”

And in keeping with Guadalupe’s vision for Cleveland Ballet as being a lean and mobile troupe with a repertory suitable for touring, Oller’s Coppélia will feature minimal sets in favor of tour-friendly lighting effects and images created by nationally known lighting designer Trad A. Burns.

“I love the simplicity of the ballet,” says Oller. “The most important thing is the story and the dance. This production is very alive.”